A Day of Celebration

Today my son Michael turns 18.  My little boy, born at just 23 weeks, has fought the good fight every day for 18 years.

For those of you who may not know, 24 weeks is the threshold of viability.  That’s when the lungs are mature enough to function outside the womb.  The doctors did not expect Michael to live.  They gave us the option of turning off life support.  Chris and I decided we could not do that.  It was one thing if Michael died due to his fragility.  It was another to deprive him of any chance to live.

Michael spent his third trimester in the Neonatal Intensive Care Unit and later the Pediatric Ward, hooked up to so many monitors and breathing machinery and undergoing constant testing to make sure everything was developing properly.  I remember the first night I was allowed to feed him 8cc of my milk through a gastrostomy tube.  On Memorial Day Weekend of that year, Monday evening, I held Michael for the first time up against my chest, his delicate skin against mine.

Our parish priest came to pray over Michael what may well have been every day.  On the 8th day Fr. Basil baptized him and gave him his name.  We still didn’t know what might happen, so we couldn’t wait for a formal baptism and chrismation at church.  Fr. Jonah, a monk and Michael’s future godfather, joined Fr. Basil as often as he could.  The doctors granted us permission to put paper icons of Christ, the Mother of God, St. Michael the Archangel, and St. John Maximovich in the isolette where Michael lay wired up to all the machines.  His official diagnosis was spastic quadriplegia, which is a form of cerebral palsy.  (Later, when Michael was 2 years old, he developed seizure disorder.)  I’ve never prayed as hard as I prayed in those months of surgeries and tests and discouraging prognosis.

Michael was released on August 14th.  The next day was the Feast of the Dormition of the Mother of God.  Fr. Basil draped his stole over Michael while I carried him into the nave, then set him on the festal icon.  When the day came for his chrismation, I think the whole parish was there with us.  At one point in the service Fr. Basil took Michael into the altar and carried him around it three times.  Waiting to receive him, I stood there with tears running down my face.  The people in the choir could see me.  Their voices faltered because they started crying too.

Michael’s survival is considered a miracle attributed to St. John Maximovich, Archibishop of Shanghai and San Francisco.  We anointed Michael with holy oil from the eternal lamp that burns at St. John’s shrine in the Holy Virgin Cathedral on Geary St. in San Francisco.  That lamp is burning now.  Go to the cathedral and you can receive a small bottle of the oil.

There have been many surgeries, many procedures, many medications, many setbacks, and many tears.  There have also been triumphs and progress and quiet moments of joy as the person whom my son is has found ways of shining through the physical difficulties that keep him from walking, talking, and eating on his own.  Michael is a smart boy, good at art, with a wicked sense of humor.  He loves Wii Sports, especially baseball.  Even more so, he loves to go bowling in a real alley.  In June, he will graduate from high school.

My baby is now a legal adult, with the whole world wide open before him. 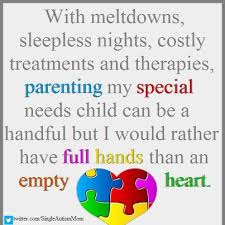 10 responses to “A Day of Celebration”