I wish you the luck of the Irish on the Historytellers Scavenger Hunt!

Here’s how to join the hunt.

Visit Storytellergirl, the next blog on the Scavenger Hunt!

Hi there! Thanks to the wonderful Sarah Zama, known to many of us as @JazzFeathers, I get to be part of the HISTORYTELLERS Scavenger Hunt on Sunday, March 17. You’re all invited!
12 authors of historical fiction set in the 1910s, 1920s and 1930s are joining together to offer a bundle of their books to a lucky reader, and that reader might well be you, don’t you think? St. Patrick’s Day is a fine day for good luck!

Head over HERE to see how you can play the hunt.

This is the link to Storytellergirl, the next blog on the Scavenger Hunt!

You can also help us spread the word. The more we are, the more fun we’ll have.

TWEET THIS:  Are you a reader of #historicalfiction set in the first decades of the 1900s? Then we are on the same page! Join the #Historytellers scavenger hunt for a chance to win 12 novels set in your favourite period! http://sumo.ly/12u1T #historicalfiction #amreading #freeebooks

G is for Gifts

Today I have some stories to tell that come from the United States of America.  My homeland is a big country.  You can do a lot of traveling without needing your passport!  Along the way I’ve had the pleasure of giving and receiving some wonderful gifts.

San Francisco, California — I was at the San Francisco International Airport when I met a Buddhist monk with a heavy French accent.  We got to talking.  Like most holy men in public places, the monk was probably accustomed to people gravitating to him.  He seemed to understand a whole lot more about me than what little personal information came up in the conversation.  His gift to me took the form of sincere compassion and some encouraging words.  As a token of my gratitude I gave him a pewter sunflower with “Believe” engraved on it.  This is why I love to travel.  You never know who you might meet, or what might happen when you do.

Maui, Hawaii — The Hawaiian Lei Greeting has been a part of Polynesian culture for several centuries.  Many tour packages allow you to choose just how luxuriant you’d like your lei greeting to be.  Before the boys came along, I took a trip to Maui with my mother.  It was quite an adventure, including a luau and a submarine ride.  Magpie that I am, I got all excited about the leis made not from flowers but seashells.  Ever since I was little I’ve had a great fondness for seashells.  Mom has been to Hawaii more than once, so she had quite a few shell leis.  She has given them all to me, along with the kukui nut bracelet and earrings belonging to my great-grandmother.

Las Vegas, Nevada — Many years ago my husband and I stayed at the Excalibur.  My father and stepmother lived in Ohio at that time.  My stepsister lived in Vegas, so we decided to meet in the middle for Christmas at her house.  (I have several stories from that trip!)   In the Excalibur there was the usual casino floor with card tables and slot machines.  Downstairs, I found a whole floor for kids full of carnival games such as Skee Ball, the Ring Toss, the Dime Toss.  There were also a few games where you used what amounted to a small catapult to shoot a frog onto a lily pad or a witch doll into a cauldron.  I know how to play poker, blackjack, and even whist, but I’m not much for gambling.  On the other hand, I love to win prizes.  I must have won close to a dozen, most of them some type of stuffed toy.  I did not have room in my luggage for all of them.  Besides, it was really more about winning them than actually keeping all those toys.  So what did I do with them?  Remember, this was Christmastime.  I wandered around the hotel, giving the toys away to little kids (with their parents’ permission).

Seattle, Washington –I had gone up to Vashon Island with a friend to visit the All Merciful Saviour Russian Orthodox Monastery.  I’ve been blessed to know Abbot Tryphon and Hierodeacon Paul for more than 20 years.  That visit deserves its own post.  Right now I want to mention yet another meeting in yet another airport.  In the Seattle-Tacoma International Airport, I was waiting for my flight to be called.  My friend and I got into conversation with two ladies who admired my friend’s earrings, which I had made.  As it turns out, one of the ladies also made her own jewelry, including the pair of earrings she was wearing.  I don’t know what prompted her to do it, but my fellow jeweler took off her earrings and gave them to me right then and there!  People are so kind.  We forget that, with all the conflict and grief in the world.  I will always treasure those earrings as a reminder of that trip and a reminder of the difference an generous impulse can make.

Soon I shall be loading my con gear for a wild weekend of gladsome geekery.  Last year at Clockwork Alchemy I managed to blog every day’s events.  Not quite “live,” but I can’t be everywhere at once, right?

This year will be a flying trapeze act between Clockwork Alchemy and BayCon.  It’s going to be a bit of a marathon, but I will do my best to give you the highlights of each day.

Today my official programming starts at Clockwork Alchemy at 5 p.m. in the San Juan Room.  “Nemo’s Realm: Steampunk Underwater.”  I even have a Powerpoint presentation!  Woo hoo!

From 6 p.m. to 7 p.m. I will be talking about “Steampunk Alchemy” in the San Juan room.  This will be fun.  I hadn’t realized just how many famous inventors were also into alchemy.

7 p.m. to 8 p.m. will find me at the 12 Hours Later release party!  Show up, buy a copy, and get autographs from the contributing authors you meet there.  Extra bonus:  I’ll have my autographed copy stickers with me. 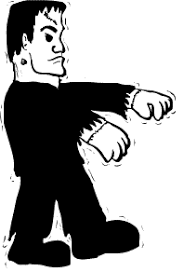 8:30 p.m. BayCon!  I shall be joining some delightful Women of Wonder at the Horror Addicts BoF.  Join us as we celebrate the release of the Horror Addicts Guide to Life.  There will be trivia games!  Door prizes!  More cool stuff!

Today is a great day for celebrating!  Here in America it’s Independence Day, celebrating 238 years of being an independent nation separate from Great Britain.  Here in my corner of America, I’m celebrating the release of my second nonfiction ebook, The Fright Factory!

Many thanks to Bridget McKenna at Zone1Design.com for once again coming up with the images, fonts and excellent advice that turned my manuscript into such a sharp-looking ebook.  Bridget did the design work for me on The Writer’s Spellbook.  When my next project is ready to become an ebook, I’ll be going straight to Bridget with that one.

The first story I ever sold was a horror story.  “Fallen Idol” appeared in After Hours, edited by William Raley.  Much to my delight, the story was later accepted for The Year’s Best Horror Stories XXI, edited by the great Karl Edward Wagner.

Which author is considered the greatest ghost story writer of all time?

The PRIZE: A Free Copy of The Fright Factory!

Still looking for answers to yesterday’s Contest Question.  That prize is still available, so go ahead and post your answer in the Comments!

Today’s question concerns that master of cinematic suspense, Alfred Hitchcock.  His movie, “Psycho,” is considered by many to be one of the scariest horror movies ever mad.  Based on the book by horror master Robert Bloch, “Psycho” has become a classic.  In my opinion, it’s the best of the many stories and movies based on the life of Ed Gein.

What did Hitchcock’s special effects crew use for blood?

How much of it did they have to use?

Why did Hitchcock tell them to stop using it?

Get all three answers right and you WIN!

Today’s PRIZE:  In my next short story I will name a character after YOU!

Contests! Prizes! Fun for Everyone!

I am delighted to announce that on Friday I will go live with The Fright Factory: Build Better Horror.

To celebrate this occasion, I will be having a contest here every day this week.  Prizes will include:

Free copies of The Fright Factory

I’ll name a character after you in a short story

Why did William Faulkner write “A Rose for Emily”?

I will draw a name from among the folks who get the right answer.  The winner gets The Fright Factory for free!