M for Masters of the Universe

He-Man and the Masters of the Universe started out as a set of action figures.  I am proud to say I owned the Castle Grayskull play set along with several of the figures.  The popularity of the toys gave rise to an animated series.  Since Hollywood never knows when enough is enough, eventually Cannon got the green light for a live action movie.

On the Planet Eternia, at the center of the Universe, Skeletor‘s army seizes Castle Grayskull, scatters the remaining Eternian defenders, and captures the Sorceress of Grayskull; he plans to add her power to his own by the next moonrise.

Christina Pickles as the Sorceress

Gwildor, a Thenorian locksmith, reveals that Skeletor has stolen his invention: a “Cosmic Key” that can open a portal to any point in time and space. The device allowed Skeletor to breach Castle Grayskull; the group uses Gwildor’s remaining prototype to travel to the Castle. 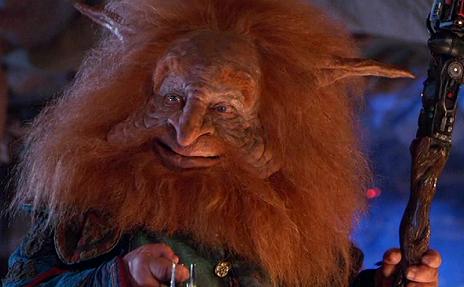 Billy Barty as Gwildor.  Wow.  That’s a LOT of makeup!

They attempt to free the Sorceress but are overwhelmed by Skeletor’s army and forced to flee through Gwildor’s hastily opened portal, transporting them to Earth. The Key is misplaced on their arrival and discovered by two teenagers, Julie Winston and Kevin Corrigan, who attempt figure out what it is and accidentally send off a resulting signal that allows Skeletor’s second-in-command, Evil-Lyn, to track the key; she sends her henchmen, Saurod, Blade, Beastman, and Karg to recover it.

What Evil-Lyn should look like, vs. the movie version.  What’s with the cape?

Kevin, an aspiring musician, mistakes the Key for a synthesizer and takes it to a music store. Karg’s team arrives and chases Julie until He-Man comes across her and rescues her.

Take a look at the next photo down below, where Det. Lubic is holding the Cosmic Key.  Kevin can’t be the sharpest knife in the drawer if he thinks that Key looks anything like the keyboard on a synthesizer.  And then He-Man just “comes across” Julie?  Sounds like he’s out jogging or something, doesn’t it?  Not exactly dynamic plotting.

Karg’s team returns to Grayskull where, incensed by their failure, Skeletor kills Saurod and sends the others back to Earth, with a larger force under Evil-Lyn’s command. Unable to find Julie, Kevin is taken to Julie’s house by Lubic, a detective investigating the disturbance created by Karg’s team. Suspecting the Key is stolen, Lubic confiscates it from Kevin and leaves. Immediately afterward, Evil-Lyn captures and interrogates Kevin for the Key’s location with a mind control collar, before pursuing Lubic.

Here’s Lubic (James Tolkan) with the Cosmic Key.  Looks to me like a weapon out of “Alien vs. Predator”!

Julie and the Eternians release Kevin from the collar before they go after Lubic. Evil-Lyn recovers the key and summons Skeletor to Earth. Skeletor’s forces overwhelm the Eternians and Julie is mortally wounded by Skeletor’s lightning blast, simultaneously destroying Gwildor’s Key.  He-Man surrenders to save his comrades, and is returned to Eternia as Skeletor’s slave. Skeletor demands that He-Man kneel before him for all of Eternia to witness, before he is killed. He-Man refuses and is whipped by Blade’s laser whip in an attempt to make him kneel.

Zeus had that fire-whip in Immortals.  Here’s Blade with his laser whip.  I had no idea you could make a laser beam flail around like that!  Nobel Prize-winning physicist Richard Feynmann would probably have laughed himself silly.

He-Man is still standing when the moon rises and Skeletor absorbs the powers of the universe. Declaring himself the Master of the Universe, Skeletor asserts his victory and continues to torture He-Man with energy blasts.

Frank Langella, who plays Skeletor, has said it’s one of his favorite roles.  When researching the character, he talked to his kids who were big fans of He-Man.  He also watched the animated series.  What’s not to love about this armor?

Back on Earth, Gwildor builds a makeshift Cosmic Key and Kevin recreates the tones necessary to create a gateway to Eternia. The group, including Lubic who attempts to arrest them, are transported to Castle Grayskull, where they begin battling Skeletor’s forces.

I think Lubic’s expression says it all, don’t you?

Evil-Lyn, resenting that Skeletor absorbed the power of the Universe without sharing it with her, deserts him along with the other henchmen.

Why do the Bad Guy’s minions ever expect him to share what he’s after?  Get real!

Skeletor accidentally frees He-Man who then reclaims the Sword of Grayskull.

Excuse me?  The omnipotent Bad Guy “accidentally” frees Our Hero, and then lets him get his hands on the the ultimate weapon?

The pair battle until He-Man shatters Skeletor’s staff, removing his new powers and restoring him to his normal state. He-Man offers mercy but Skeletor draws a concealed sword and attempts to kill He-Man;

I’m sorry, but how could you possibly conceal a sword?  OK, maybe the big black hooded cloak is covering it up.  I defy anybody, even Skeletor himself, to draw a sword of better than average length from under a full-length cloak fast enough to kill the enemy without getting tangled up in several yards of cloth.  (Yes, as a matter of face I have handled swords while wearing a full-length, hooded cloak.)

He-Man manages to knock Skeletor from the throne room into a towering pit below. The freed Sorceress heals Julie, and a portal is opened to send the Earthlings home. Treated as a hero for his exploits, Lubic decides to stay on Eternia.

Probably a wise decision, because the Police Chief will be asking questions about where Lubic went when he vanished from the crime scene.  “Saving the universe” is not a reply that will help his career prospects.