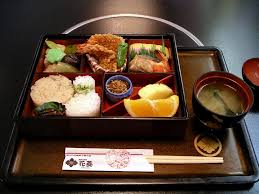 Today’s actual partying has included a bento box lunch at my second favorite sushi emporium.  My #1 favorite is closed until New Year‘s.  Chris speculated that the staff was at home pounding mochi, which is entirely possible.  He told me this fascinating fact: pounding mochi for the New Year’s rice cakes is a really big deal in sumo stables.  I can see those large gentlemen being good at it, as strong as they are.   We had a good time at lunch, watching this little tiny Asian girl in her party dress give our server a workout trying to maneuver around the little girl while serving our bento boxes.  The music playing over the PA system was some strange langorous pop music.  Granted, listening to taiko while you’re trying to eat isn’t always that relaxing, but some shamisen and shakuhachi would have been nice. 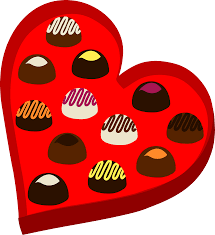 After lunch we happened to spot a new chocolate shop across the parking lot, Ashby Confections.  This place was amazing.  One of the chocolates on display is made with Ghost chili.  If you’re not familiar with the world of chilis, let’s just say this is the absolute top of the mountain, King/Emperor/God of chilis.  Makes habaneros look like bell peppers.  For you endorphin junkies out there, this might make for quite a culinary adventure.  Me, I chose a Caramel Apple Truffle make with apple brandy the confectioner brought back from Paris.  If all this sounds worth investigating, and believe me, it is, you can see more of the delights available at www.ashbyconfections.com.

There is a rock shop along Highway 9 that I’ve pointed out to Chris more than once.  He suggested we visit it, because now that we’d had some chocolate, nothing would make me happier than buying a new rock.  This sounds silly, but more than once in the days when the depression was still crushing my spirit Chris would take me out and we’d hunt up a shop that sold semiprecious stones.  That’s how I got my labradorite heart, big enough to fit in the palm of my hand.

Mountain Spirit is one of those places where you just know the Buddhist, yoga, Hindu, and New Age folks like to shop.  Plenty of statues of Kwan Yin and Ganesh, prayer flags. and whatever incense was burning.  It’s a nice place with something for every age range.  I had been in there once before, but not on a serious mission of acquisition.  I explored the place, mentally checking off every rock I already had, i.e. amethyst and malachite and lapis lazuli and tiger iron and even Pakistani agate.  Much to my delight, I found a splendid specimen of kyanite.  It was available in obelisk form, which did a lot to show off the color variations and crystalline structure.  Even better was the “raw” specimen that bared the blue/gray crystals in their native matrix.  Had to have it.  The really sweet young lady who runs the shop showed me the listing for kyanite in her book on the meanings of stones.  That information harmonized well with the goals on my immediate horizon for the New Year, so all the better.  Now I just have to find a good display stand. 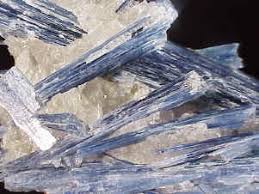