#atozchallenge: Y is for Yokai 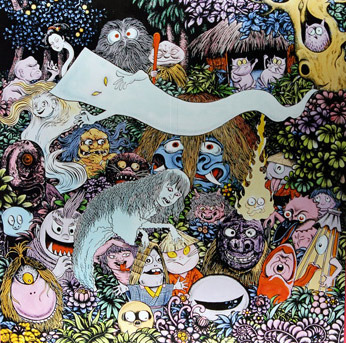 The yokai of Japan are many and varied. They go from humorous to horrifying. Some arise from the animistic principle in Shinto. Others are born from the angry, vengeful passions of the human heart.

These are a few of the more unusual yokai.

Dodomeki, the spirit of the pickpocket or thief. 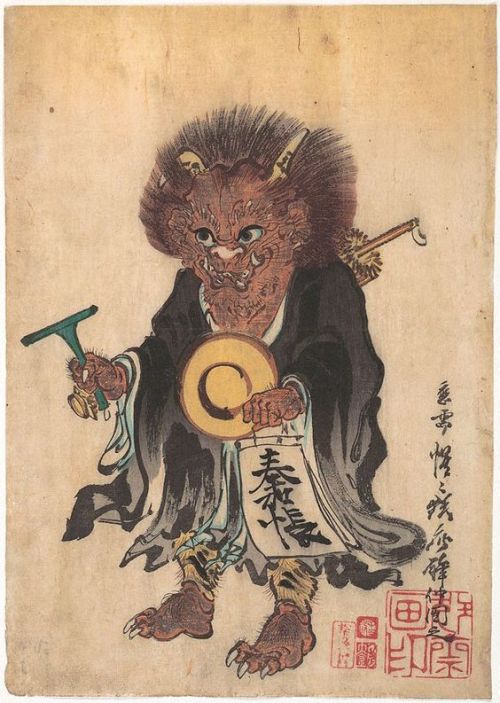 The baku, otherwise known as the ‘dream eater’, is a mythological being or spirit in Chinese and Japanese folklore which is said to devour nightmares. The baku cannot be summoned without caution, however, as ancient legends say that if the baku is not satisfied after consuming the nightmare, he may also devour one’s hopes and dreams. 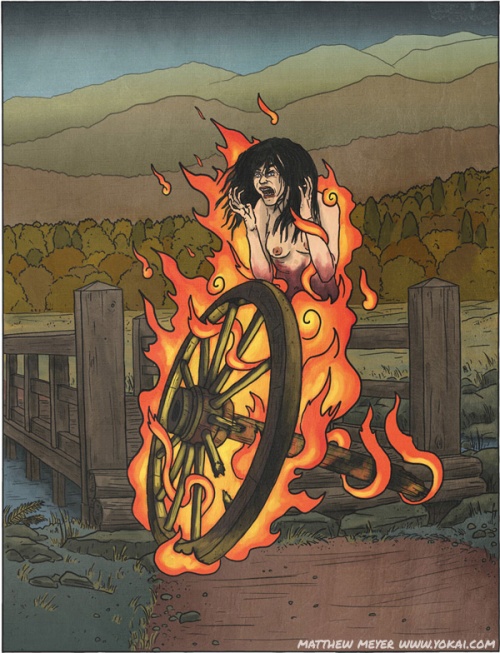 This is the Kawataguruma, a tormented naked woman riding on the wheel of an ox cart that’s ablaze. If this reminds you of the wanyudo, you’re right. Apparently the Wheel Monk has a female counterpart who rolls around collecting impure souls and putting curses on people.

#AtoZBlogChallenge B is for Bakemono

Bakemono are the group of yokai (monsters) in Japanese mythology who are shapeshifters and tricksters. Foremost among them are the mujina (badger), the tanuki (raccoon-dog), and the kitsune (fox spirit). Also holding noteworthy rank among the bakemono is the nekomata, the split-tailed cat who can assume the form of a beautiful woman.

In Putting On Airs (Thirty Days Later), there’s a surprisingly large cat terrorizing the dogs in Dr. Harrington’s neighborhood. With the help of the monks of Kiyomizudera, Madelaine builds a trap meant to catch what she suspects is the real cause of all the trouble.

In the second story of this pair, Blown Sky High, Constance is in charge of a garden party held in conjunction with the Blue Dragon Festival at Kiyomizudera. The party celebrates the Blue Dragon, an avatar of Kannon, Goddess of Mercy.  The party features Madelaine’s origami paper dragons and a wondrous clockwork dragon that adds just the right touch to the party’s symbolic rejoicing.

#AtoZChallenge: A is for Amatsu Mikaboshi 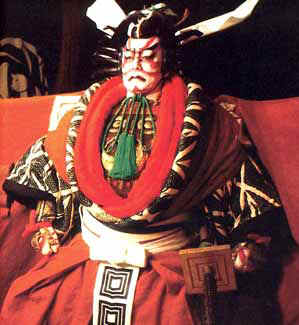 Welcome to Day One of the A to Z Blog Challenge. This year I’ll be introducing you to the characters, settings, mythology, and other story elements of my Kyoto Steampunk series.

Amatsu Mikaboshi is the Japanese God of Chaos. Some people confuse him with the Christian Devil. This rather drastic case of mistaken identity is at the center of the first short story, In the Midnight Hour, which appears in Twelve Hours Later. When Dr. Harrington’s young daughter Madelaine falls ill with a fever, Nurse Danforth resorts to ancient superstition and goes to the crossroads at midnight, intent on making a deal with the Devil if that will save Madelaine’s life.

In the second short story, A Demon in the Noonday Sun (Twelve Hours Later), Dr. Harrington is looking after the Abbot of Kiyomizudera during the New Year’s festivities. Amatsu Mikaboshi appears, bent on punishing Dr. Harrington for what happens during the encounter with Nurse Danforth. Given Amatsu Mikaboshi’s power to hurl black fire, along with his very large sword, the doctor must act quickly to protect the Abbot from harm. 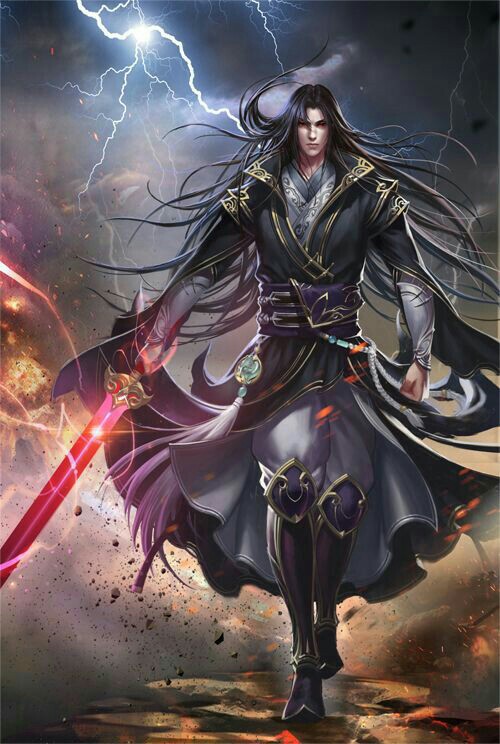 Welcome to my fourth adventure as a participant in the A to Z Blog Challenge!

This year I will be taking you into the depths of my fiction. Thanks to the wonderful folks behind Clockwork Alchemy, I have two short stories in each of the three convention anthologies published so far. You can see all three covers in the sidebar. History is my passion and historical fiction my favorite reading and writing pleasure. With that in mind, my A to Z Challenge Theme is 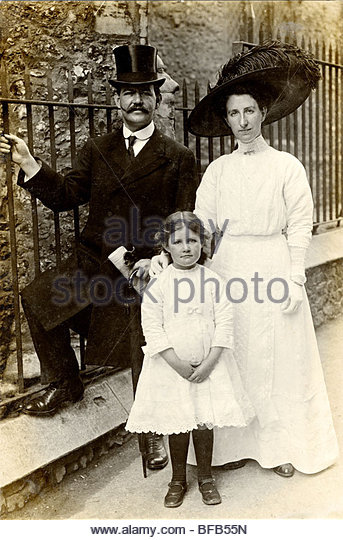 Come and meet the main characters such as Dr. William Harrington, eminent British physician, his wife Constance and their daughter Madelaine, a genius at creating clockwork automata and a keen student of Japanese language and culture. 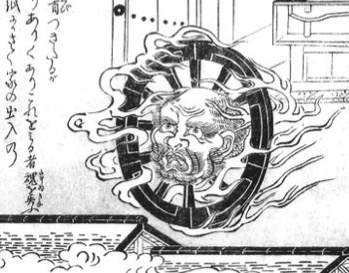 Meet his adversaries who hail from various corners of Japanese mythology! 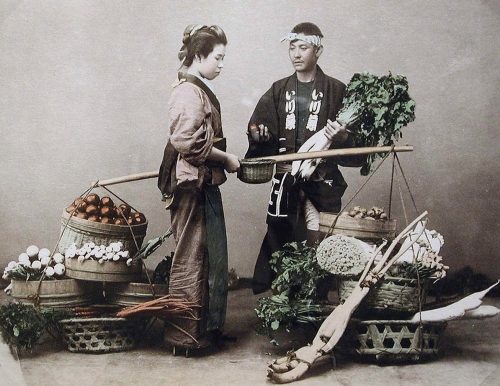 Meet the people of Japan who bring their strengths and weaknesses to the battles Dr. Harrington must face as he struggles to carry out the mission entrusted to him by Queen Victoria herself.

Join me for each of the 26 letters of the alphabet.  I will take you behind the scenes into the creative process and amazing historical details that shape Dr. Harrington’s adventures! 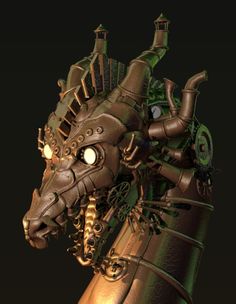 And so we come to the final letter in the A to Z Challenge. I have chosen Zoo in order to present some of the gorgeous but less commonly seen creatures that have inspired works of Art Nouveau craftsmanship. 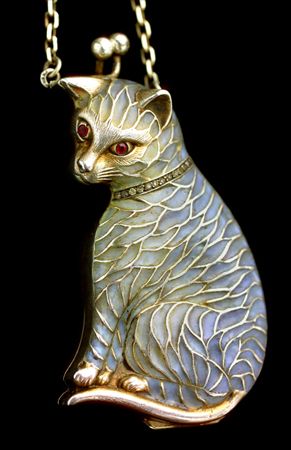 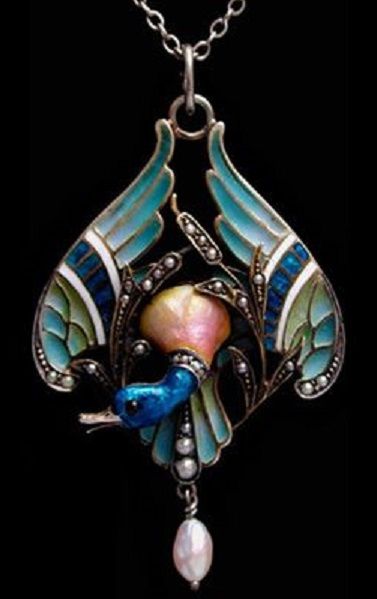 A silver, pearl, and plique-à-jour enamel pendant modeled as a duck in flight, by Meyle & Mayer, circa 1900. 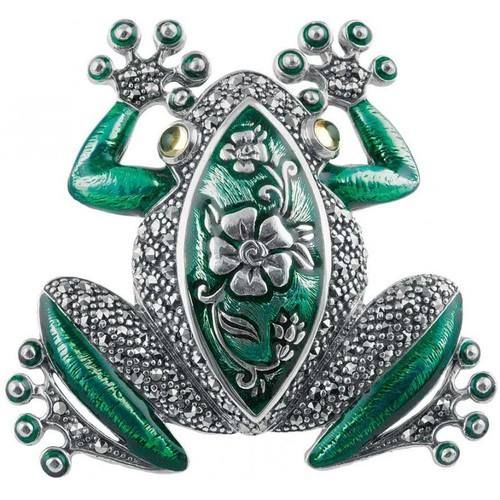 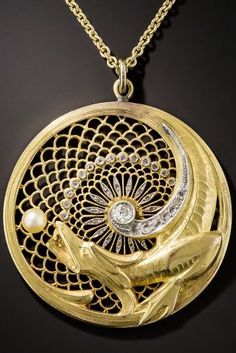 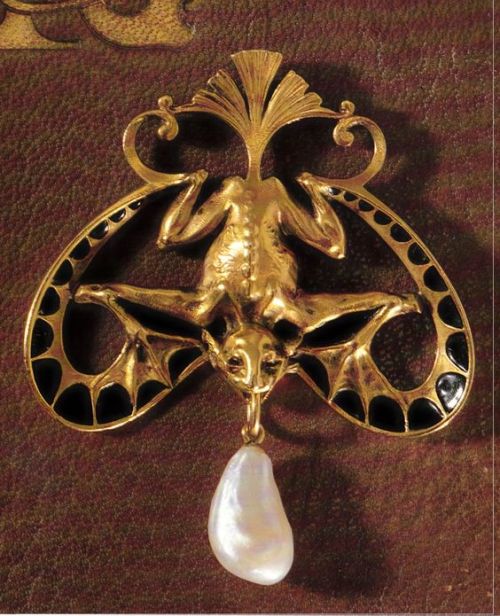 Thank you so much for joining me on this adventure into the world of Art Nouveau. I’m very grateful for your likes, comments, and follows. 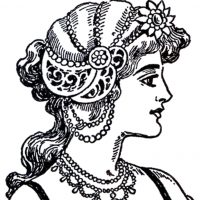 Meet the Real Me, Live and In Person!

Convention season is underway, which means I’ll be out and about performing my Shameless Self-Promotion Road Show.

Memorial Day Weekend is just around the corner!  I will be appearing at two, count ’em, TWO separate conventions!

Hang out with fellow horror fans!  Meet some of the Horror Addicts!  Win prizes!

4 p.m. Death panel — How our culture deals with death, or fails to.

I’ll be telling the true story of what happened in 1987 when I died in a car accident!

Come one, come all!  We’ll be breaking down steam power to its component parts, then dreaming up gods, goddesses, spirits, elementals, and other appropriate Powers That Be to preside over each component.  Be there for the creation of the first Steampunk Pantheon!

This is short for Victorian Speculative Fiction, best typified by Jules Verne.  There’s a whole lot more worth exploring, so come join my fellow panelists as we compare and contrast the best and the worst of the period!

To Be Announced.  I have no official commitments right now, but you know me!  I’m sure to be up to something!