There are a total of four movies in the Deathstalker franchise.  They put the “low” in “low budget” with their steady decline in plot, characters, and special effects.  On board for the first Deathstalker movie was none other than Roger Corman himself, the king of the B-movies.

All of these movies feature lots of pretty warrior women, princesses, and slave girls who are wearing as little as possible.  To be fair, the heroes are handsome and they run around half-naked too.

Deathstalker II is so bad it’s hilarious.  Wikipedia says, “Princess Evie of Jzafir is deposed by the evil Jerak and his ally Sultana. Posing as Reena the Seer, Princess Evie enlists the aid of the renowned hero Deathstalker. Together they battle the forces of evil and a clone of Evie created by Jerak, to win back Evie’s kingdom.”

Sure, all that happens, but there’s so much more!  The sorcerous clone of Evie apparently eats people alive, leaving only the bronzed face of her victim which she adds to the headboard on the bed.  Deathstalker and Reena get captured by Amazons.  Deathstalker must fight for his life in a wrestling match with an actual lady wrestler with the ring name of “Queen Kong.” 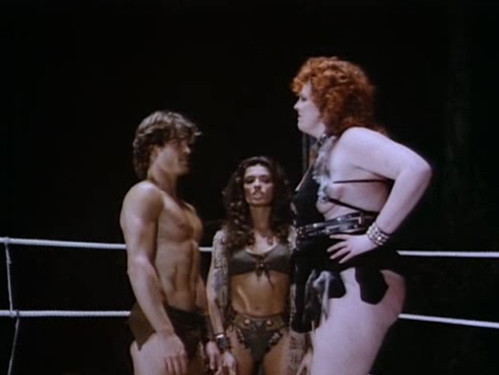 Starring John Terlesky as Deathstalker and Monique Gabrielle as Reena, Deathstalker II is a borderline porn flick with swords and magic.  It does have a script that’s worth the time.  When Sultana tells the evil Jerak that the famous warrior Deathstalker is helping Reena, Jerak starts spluttering with laughter and says, “Deathstalker?” in this perfect tone of sarcastic disbelief.  Watching John Terlesky play Deathstalker messes with my mind because he looks a lot like a boyfriend I had back when I was 19 or so.  Poor Mr. Terlesky can’t get through some of his scenes without breaking into a grin or just losing it completely.  When he faces the clone of Evie who plans to seduce and devour him, she cuddles up to him and gets a good grip on the front of his leather pants.  Have you ever seen a hero in one of these movies blush?  Terlesky does, the poor devil.  Watch Deathstalker II, especially the outtakes.  Those are really priceless.

In this installment, Deathstalker is played by John Allen Nelson, an otherwise respectable actor who has gone on to have a busy career in television.  Deathstalker is hired by yet another princess to find one of three magic jewels that are crucial to restoring peace to the kingdom.  Two of the jewels are inside the fortress of the evil sorcerer Troxartes, a necromancer who believes in recycling.  Every time he kills a bunch of the good guys, he raises them from the dead to be his zombie soldiers.  The princess gets killed, but as luck would have it, she has a twin sister!  I kept getting distracted by the fact that John Allen Nelson’s head did not look like it belonged on his body.  Clearly the man had worked out and muscled up for the role, but it really looked like his head was sticking up out of some kind of costume.  How bad is this movie?  It is so bad I’ve watched it only once.

Rick Hill returns to the role he created, the mighty warrior Deathstalker.  Doesn’t look too happy about it, does he?

Once again I shall be participating in the great April A to Z Blog Challenge!  This is my third year in a row.  Many thanks to Arlee Bird, Alex J. Cavanaugh, and the mighty team of A to Z ninjas who help make this event so special.  When I began my blog three years ago this month, participating in the A to Z Challenge helped me discover the joys of blogging within a community.

Time now to announce what I’ll be blogging about during this year’s challenge!

One of my guilty pleasures in watching really bad movies.  You can’t do much better than a really bad sword & sorcery movie.  Join me during the month of April for twenty-six awful adventures, hamfisted heroes, hysterical heroines, Vaudeville villains, and some of the tackiest treasures ever invented! 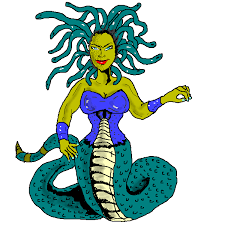