For A Lady Who Must Write Verse

Unto seventy years and seven,
Hide your double birthright well-
You, that are the brat of Heaven
And the pampered heir to Hell.

Let your rhymes be tinsel treasures,
Strung and seen and thrown aside.
Drill your apt and docile measures
Sternly as you drill your pride.

Show your quick, alarming skill in
Tidy mockeries of art;
Never, never dip your quill in
Ink that rushes from your heart.

When your pain must come to paper,
See it dust, before the day;
Let your night-light curl and caper,
Let it lick the words away.

I’ve been having running conversations with my two best friends, also writers, on the subject of improving the depth and meaning in my writing.  Both have advised me to work with and through the considerable amount of trauma I’ve experienced.  Car accidents, surgeries, family upheaval, my sons’ disabilities.  Yes, it could always be worse, but I do have some rather weighty material to draw on.

Right now I’m up against a good example of what could be an opportunity to prove my friends right.  In the short story I’m working on right now, I’ve come to the scene where the hero is forced to watch his father get eaten by the monster.  If the hero’s father had taken the hero’s warnings seriously, this probably wouldn’t be happening.  Part of the conflict between the father and the hero is the hero’s refusal to play along with his father’s corrupt business practices and participation in a major cover-up.  To the father, that translates as the son being a real disappointment to him.  As the hero watches his father suffer a really horrible doom, the hero isn’t thinking his father is getting what he deserves.  The hero sees this as the culmination of being such a disappointment to his father, even though the hero knows he’s made the better moral choices.

I’m having a really hard time writing this scene, even though I understand it and I’ve got the action blocked out on paper.  Why?  Because November 18th would have been my father’s birthday.  Daddy died seventeen years ago, one month before Michael had to be delivered by emergency C-section.  This is a very hard time for me.  Thanksgiving is all about family gathering together and being grateful for who’s there to share the feast.  My father never got to see his grandsons.  I know how much he was looking forward to me having children.  Daddy would have make a terrific grandfather, taking the boys fishing, playing games with them, and best of all, going bowling.  Every time we take Michael and John to the bowling alley, I feel like Daddy’s spirit is there with us.

So you can see the trouble I have with making my hero watch as his father gets eaten by a monster.  It’s easy to kill characters you hate, characters that might be based on people in real life who have given you reason to dislike them.  It’s much harder to kill characters you love, especially when they’re based on people in real life whom you love.  I don’t know how Joss Whedon or George R.R. Martin stand it, I really don’t.

Now let me say that my hero’s father isn’t much like my own father.  My fictional world is probably better off with one less corrupt business executive.  That’s not the point.  My main concern is my hero and his emotional turmoil.  How can I sit here at the keyboard and take the empathy that even now has tears running down my face and translate that into the words that will express my hero’s suffering and the decisions he makes based on it?  I don’t know, honest to God I don’t, but I have to find a way.  I have to draw on my pain and reshape it into the pain as it is experienced by my hero, in a way that will resonate with my readers. 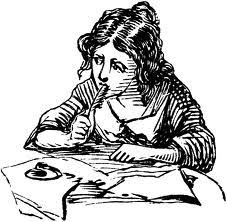 Dorothy Parker wrote, “Never never dip your quill/In ink that rushes from your heart.”   To get to the level of writing I want to achieve, that’s exactly what I have to do.  I have to take that quill and stab myself in the heart, over and over again, keep that ink rushing out, and write my stories from the very essence of my heart.  I’m going to cry a lot, and I’m going to get headaches, and I’m going to get sick to my stomach.  Nobody ever said it was easy being a writer, and anybody who thinks so is a fool.

I will complete this story.  I will do right by my hero and my father.  And then I will move on to the next story, sharpen the next quill, and spill my metaphorical blood across the page.  Because I am a writer, a storyteller, and this is what I do.

I considered organizing this list in order of importance, but that feels a little too left-brained.  The very impulse to prioritize what makes me happy suggests a certain rigidity of thinking.  Different things make me happy in different ways and at different times.  One of the many benefits of Cognitive Behavioral Therapy is learning how to reframe situations, to develop flexibility in one’s thinking and perceptions.  So!  Here’s my Happy List, in no particular order:

Ice cream.  At the moment my favorite flavor is Ben & Jerry’s Karamel Sutra, but I’ll take any good chocolate, Neapolitan, spumoni, or seasonal flavors such as eggnog.

Kittens.  Love those little tiny paws, the itty bitty fangs, and the way they can doze off in a sitting position and just topple over.

Writing success.  Selling a short story, pushing through a rewrite, looking over an old piece of writing and now having the knowledge to make it what it could be….  And then there’s that feeling summed up by Dorothy Parker‘s comment, “I hate to write but I love having written.”  The actual labor can be a real pain, but oh the pleasure of knowing I’ve churned out another two thousand words!

Finding just the right gift for someone and seeing that person surprised and happy.

Getting mail.  I’m talking about greeting cards and handwritten notes and Christmas newsletters and graduation invitations and birth announcements.  I love the physical act of writing.  Choosing a favorite pen and going through my stationery wardrobe for just the right notecard or paper so I can write to someone is an old-fashioned pleasure that I hope never goes out of style.

Peace and quiet.  I tend to stay up late.  I’m a night owl by nature.  Given that I grew up as a de facto only child, I’m used to being alone and there are times when I really prefer it.

Really bad sword & sorcery movies.  Remember Miles O’Keefe, star of the “Tarzan” movie with Bo Derek as Jane?  Miles went on to star in a few of the worst sword & sorcery movies ever made, featuring the main character known as Ator.  Then there’s “Hawk the Slayer,” with its really terrible leading man and some of the most pathetic attempts at special effects I’ve ever witnessed.  Green Silly String as magic?  Last but not least, any time I need some serious belly laughs, I watch any of the “Deathstalker” movies.

Knowing my mother is proud of me.  When I sold SHIP OF DREAMS, Mom gave me a fully constructed model of an actual brigantine, which is the pirate ship and key setting of my novel.  I promptly got some plastic pirate figures from the party store and put them all over the deck and in the rigging!  That’s a big example.  All through my life my mother has given me cards and gifts both large and small as tokens of her pride.  She’s the one who got me addicted to collecting unusual bookmarks.  When I was eight years old and decided I wanted to be a writer, I told my mother I would dedicate my first novel to her.  The day I gave her a fresh new copy of my novel and watched her face as she read the dedication page will remain one of the happiest days of my life.

My sons.  I love my boys.  Every accomplishment, every victory, even the tiniest sign of progress, is a source of joy to me.  The other day we were talking about how Michael needed a hair cut.  He said, “Barber.”  You have no idea how huge a moment that was!  For Michael to enunciate a new word clearly enough for us to understand him is a real triumph.  And then there’s John, who argues about his homework and struggles with some Social Studies projects and still made the Honor Roll again.  My boys are fighters.  My boys are winners.

Please, tell me what makes you happy.  I take great pleasure in other people’s joy.