Yes, ladies and gentlemen, Bouquet of Rivals, Book 3 of The Flower Maiden Saga, weighs in at 50,064 words.

Confessions of a NaNoWriMo Virgin

Yes, it’s true.  As chaotic as my life is, as crowded as my days are, I have indeed signed up for NaNoWriMo.

Why, you ask?  Why do I intend to put myself through the hardcore boot camp of daily word count production?  Two reasons.

ONE:  Today I finished editing Sword Master, Flower Maiden.  I still have to run it by my agent, but I think I am very close to declaring this book FINISHED!

TWO:  NaNoWriMo is a great way to jump start Book 2 in the trilogy, which I have given the working title Garden of Lies.

1700 words per day, every one of the 30 days in November.  That’s about seven pages per day.  When I’m in good form, I can write five pages in 90 minutes.  I’m going to be logging my daily word count on my profile at the NaNoWriMo site, so people can watch my book grow.  They cheer me on, I cheer them on, and we all create literature together.

Do I have the book all plotted out already?  No.  I have this messy pile of notebooks and loose papers and a pile of research about the Imperial Palace in Kyoto, where the book will take place.  Once I hear from my agent and know what to do about Book 1, then I’ll be ready to settle down with the pile of notes and research and see how much I’ve already got.  Having taken inventory and gotten organized, I will then dump it all into the appropriate sections of Scrivener.  Gotta set up my workspace for this new adventure.

I’m already getting excited.  I know how to write fast without thinking too much about it.  I know how to pick my subject and keep that pen moving until the timer goes off.  Will I use a timer?  Probably.  Will I use it every day?  Depends on how well the work is going.  If I hit a dry patch, I might need the timer do nag me into being productive.  Other days I may go wild and crank out all kinds of material.  Bradbury said, “Throw up in the morning, clean up at noon.”

How about you people out there?  Any NaNoWriMo veterans?  Any words of wisdom for this newbie?  I welcome whatever gems of knowledge you see fit to share.

Anybody want to be writing buddies?  I’m not entirely clear on that concept.  I don’t get out of the house without major logistical planning, but I’m sure I can provide some kind of support and maybe even advice.  I’ve written four complete novel mss.  This will be the first time I attempt to do so under such a compressed time frame.  We shall triumph together!

Dare to Rip Out the Seams

I’m about fifty pages away from completing this edit of my historical Japanese romance novel.  I say “this edit,” because once I’m done I’ll be printing out the ms and letting it sit for about a week and then going through it again with the red pen.  If my beta readers will do me the kindness, I’ll have them go over the ms and tell me if I’ve improved the weak spots.  Then I will go through the ms and get a sense of whether or not the drastic changes I made to this draft really work.

New writers tend to get scared by the editing process.  It’s almost as if they’re afraid they’ve got only so  many words inside them and they just can’t make any more.  Nonsense.  There are always more words where the first batch came from.  Yes, sometimes it’s hard to coax the “better” words out.  When I wrote my very first novel, I hit a patch about three-fourths of the way through the process where my writing was terrible.  I knew it was terrible.  I had no idea how to find my way onward to improve the plot thread.  That lasted for about three weeks.  Then something made the light go on in my Idea Factory and the book started to work again.  The important point here is that during those three weeks of hell, I just kept writing.

That’s one way to cope with a problem in the narrative.  Another method is to just go wild and brainstorm possibilities.  Thunder and lightning!  Dramatic reversals!  Oh my God, I never saw THAT coming!  I mean it.  Go nuts.  Get past the insecurity and the anxiety and the frustration and the fatigue and just rip it all apart.

My best friend has been telling me that I’ve been missing an opportunity with a character that has worked her way up to joining the Main Cast.  I should really find a way to work her into the climax, because given how she’s managed to take up her share of story time, she really should be part of the grand finale.  I didn’t want to hear this.  The ms was already too long.  I was tired.  I did not want to push myself to do the work that would result in doing justice to this character and her contribution to the plot.

This is the moment that separates the wannabes from the serious writers.  Was I going to let myself get away with a half-assed job?  The character wasn’t all that important.  There were at least two spots where one of the bad guys could easily have killed her.  She’s my heroine’s key antagonist, so fine, let the bad guys turn her into koi chow!

Was I going to do right by all the time I’ve already invested in this project?  Was I going to show respect for the time and effort my beta readers had donated?  Was I going to do my absolute best to tell the best story I possibly could?  There were no trumpets.  There wasn’t a big thunderstorm with lightning.  I just got to thinking about how and where I could fit this character into the grand finale.  And sure enough, I found the exact place.  And then I found the exact place where I could do the set-up that would put her in that perfect position.  I now have the potential for genuine edge of the seat suspense as this character does her damnedest to kill my heroine when my heroine is just about to reach what she’s been after through the whole story.

This change, the tweaking of a few lines of dialogue here, the addition of maybe two scenes there, will make a serious difference in the overall quality of my story.

If you want to be a serious writer, resign yourself right now to the long haul.  Good work takes time.  Great work takes even longer.  Hang in there, believe in yourself, believe in your story.  And if you get stuck, remember Chandler’s Law: When in doubt, have a man come through a door with a gun in his hand. 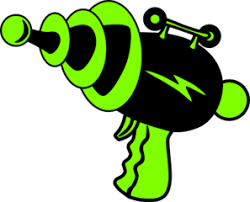