H for Hawk the Slayer

If I had to pick just one movie as the single worst sword & sorcery film ever made, the disjointed godawful mess that is Hawk the Slayer leaps immediately to mind.

Voltan (Jack Palance) is the bad guy, elder brother of Hawk (John Terry).  Voltan has killed not only Hawk’s wife but their father as well.  Voltan is determined to possess the “mindstone,” the sword, and rule over whatever patch of swamp these people call home.

As part of his evil scheme to force Hawk to give up the sword, Voltan kidnaps the Abbess and holds her for ransom.  A large portion of the movie is spent running in and out of this abbey, shooting the equivalent of sitting-at-the-inn scenes, and holding two battles there.  At some point Voltan’s son Drogo shows up.  He’s a chip off the old block, plotting against Voltan in what appears to be a fine family tradition.

Here’s a piece of Drogo’s dialogue, which indicates the general incoherence of the script:

“Now this must stay a secret between you and me. Not only will I bring back the head of this Hawk, but I’ll have the gold as well. Then Voltan will see who is the lord of the dance.”

The middle of the movie consists of Hawk running around gathering up his minions.  He ends up with a group straight out of bad AD&D fan fiction: an elf, a dwarf, a giant, the sorceress, and a guy named Ranulf.

Consider the cinematography.  It’s painfully obvious that of the magical disappearances of some characters are nothing more than a matter of stopping the camera, the actors leaving the frame, and starting up the camera again.  Then there’s the bargain basement trick of running the film backward, to say nothing of the “flashbacks” set at different point in Hawk’s life which were clearly all shot on the same set on the same day.

The so-called special effects are embarrassing.  There’s this movie’s magic sword, called “The Power.”  The pommel is a hand that grabs the “mindstone,” a chunk of crystal that enables Hawk to control the sword via telekinesis.  The sword is the only thing Hawk can move, because his face is locked into the same stony expression throughout the entire movie. 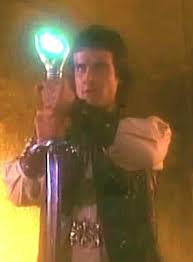 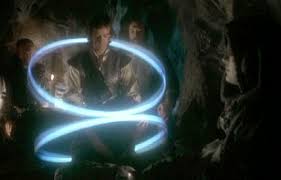 My favorite, hands-down winner for the Cheesiest Special Effect of All Time, is the “magic” cast by the unnamed sorceress during the climactic battle.  She sticks her arm in through the doorway and somehow spews a steady stream of bright green Silly String at her target, covering the man’s head and shoulders. 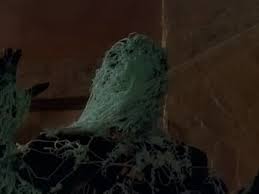 For the grand finale, the final confrontation between good brother and bad brother, what could possibly be more appropriate than forty-five seconds of actual combat rendered in slow motion?

The ending is a lame attempt to inspire suspense and anticipation for the sequel, Hawk the Hunter.  Well gee, it’s been thirty-five years.  Somehow I don’t think that’s going to happen.

12 responses to “H for Hawk the Slayer”