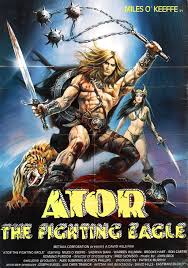 When I was in high school, the first of the Ator movies appeared in theaters.  At the time I was heavily into sword & sorcery, so I went to see it.  Not five minutes into the actual movie, the dramatic voice-over put a name to the bad guys: the Kingdom of the Spider.  You don’t have to be a movie expert to know what that means.  Sooner or later, Our Hero is going to go up against a spider the size of a tank.  I’ve gotten a lot better in recent years, but at that time if I saw so much as a tiny spider, I started screaming.  It’s a good thing I’ve always had a vivid imagination, because I spent most of the movie with my eyes shut. I’d seen Miles O’Keeffe in the remake of “Tarzan, the Ape Man,” and while that was hardly Oscar material, my main interest was the eye candy factor, so it was all good.  I did expect more out of a movie that promised sword fights.

“Ator: The Fighting Eagle” begins with Our Hero asking his father Torren for his own sister Sunya’s hand in marriage.  Excuse me?  Ator wants to marry his own sister?  Well gosh, as luck would have it, Torren chooses that moment to tell Ator this is not a problem because Ator is in fact adopted.  Does anybody in Torren’s court have a problem with this?  Apparently not, because the wedding plans move ahead.   Ator is doing the barbarian equivalent of choosing a boutonniere when Dakkar, High Priest of the Spider Cult, has Sunya kidnapped.  Can you guess what Dakkar plans to do with Sunya?  Here’s a hint: it involves a really huge spiderweb.

This is plainly a rip-off of Conan and Valeria in “Conan the Barbarian.”

So Ator vows to rescue his beloved, but first he must learn how to fight to defend himself from all the dangers along the way.  What’s this?  He’s a prince in a warrior culture and only now is anybody teaching him how to use a sword?  I believe the expression I want here is  <facepalm>.  Once his training is complete, off goes Ator to rescue his beloved.  (The sword training should have taken several weeks, if not years, so in a realistic world Sunya would already be spider chow.)

On the way Ator meets Roon, an Amazon thief, who decides to help him out on his quest.  Sabrina Siani wears the armor well enough, but she’s no Valeria.  Sandahl Bergman, a professional dancer, made her sword fights in “Conan the Barbarian” look great.  In the Ator movies, and I mean in ALL of the Ator movies, you have the dubious pleasure of watching Miles O’Keeffe parry before his opponent even starts to attack.  I’ve watched dozens of movies that include sword fights.  My husband lettered in fencing in college, and back in my Ren Faire days we both worked at the fencing booth.  I tell you, it is painful to watch Ator walk through his fight blocking like a nervous groom learning how to waltz.  You can see the stunt men holding back until he’s in position.

The middle of the movie is taken up by set pieces from a bad D&D campaign.  There are hideous witches, undead warriors, and then Ator’s own shadow attacks him!  It’s a creature of sorcery, so its fighting skills are far superior to those of Ator himself.

Even so, Our Hero triumphs and enters the lair of the Spider Cult.  Some day, if I turn my writing skills toward game design, I’m going to create a Trivial Pursuit variation all about adventure movies.  Observant players will be able to answer the question that comes up time and time again, from Indiana Jones to Harry Potter:  Just how many tarantulas did they use in that scene?

Poor Sunya, stuck in the web while Ator fights off the Mother of All Spiders.

If you want to have a good time and you’re OK with lots of spiders, then grab some popcorn and settle in for 98 minutes of predictable storytelling, silly dialogue, laughable costumes, really bad sword fights, and special effects that make the original “Doctor Who” look like Jerry Bruckheimer with a bottomless SFX budget.  (Don’t get me wrong, I love “Doctor Who.”  Tom Baker then, Christopher Eccleston now!)  In all fairness, I should praise Ator’s best asset: his hair.  No matter how rough things get fighting the big ugly spider puppet, Ator always has great hair.

Join me tomorrow for a look at a true B movie!