It has been a long and difficult week all over the world.  So many losses.  So much upheaval.  I’ve seen a lot of information out there about depression and how to cope with it.  I’ve seen a lot of really stupid remarks by people who have no idea what it’s like to live with the big Black Dog day in and day out, to go to sleep (if you can) with the Black Dog sitting on your chest and then wake up to it gnawing on your heart.

One suggestion I’ve heard several times is to go do something for other people.  Get out of your own head, away from your own life, and help somebody who needs it.  You could make all the difference.  With that in mind, I’d like to share seven events from my life, seven moments where the kindness of strangers made a huge difference to the suffering I was enduring at that time.

1) When I was ten years old, I had to have surgery to remove the birthmark on the right side of my rib cage.  I don’t remember where the hospital was, but I do remember it was a long way from home.  In those days parents weren’t allowed to stay in the same hospital room with their children.  That meant my mother had to get a hotel room down the road.  Fortunately, I could see the hotel’s sign from the window of the my hospital ward.  Even so, I was alone, I was scared, and a bunch of strangers were about to wheel me into an operating room so the doctor could cut off a chunk of my skin.  There was another girl in the ward.  She was pretty, with long blonde braids.  I don’t know what happened to her, but her jaw was broken and it had to be wired shut.  She couldn’t talk, right?  The night before my surgery I stood there at the window crying.  I wanted my mother and I wanted to go home.  The blonde girl stood next to me, put her arm around me, and leaned her head on my shoulder.  She let me know I was not alone.

2) One Halloween when I was in high school a good friend of mine told me that if we dressed up in costume, we could get in to see “The Rocky Horror Picture Show” for free down at a theater near the beach.  So we got dressed up and off we went.  For some reason my friend got his wires crossed.  There was no such offer.  By then it was too late to do much else.  As we stood there, disappointed and trying to salvage the evening, a woman who was standing in the theater lobby walked over and put money on the ticket counter.  All she said was, “You’re in!”  We thanked her up one side and down the other.  I had never seen the movie, so that was quite a memorable Halloween.  This was not a terribly serious situation, but even so, a total stranger stepped up and did something generous and kind.

3) When I was in the hospital on bedrest before Michael had to be delivered early, there were three perinatologists on rotation in that hospital.  The one I liked even before he spotted the problem and had me admitted to the hospital immediately.  The second one I don’t remember all that well.  The third doctor was one of those tall, aloof, distinguished men who may be brilliant at medicine but lack something when it comes to their bedside manner.  Once it became clear that I would have to stay in the hospital until a) Michael reached a safe length of time in utero, or b) the crisis came and he had to be delivered, I had to resign myself to the long haul.  Chris had brought some icons, including the one of my patron saint, St. Irene of Chrysovolantou.  The third doctor came into my hospital room one afternoon.  Now that in itself was odd, because “morning rounds” happen in the morning, right?  The doctor had brought me this big beautiful coffee table book.  It was full of gorgeous photographs of the work of Faberge, who is famous for the jeweled Easter eggs made for the Russian royal family.  It’s funny how you believe your impressions of people.  I never would have expected such a gesture from this doctor.  And yet, he offered me the book, making a sympathetic comment about all the time on my hands and how he’d noticed my icons and thought I might enjoy the book.  One of my nurses let me know it was the doctor’s own personal book, too, not something from the hospital library.

4) My son Michael’s birthday falls in late April.  Depending on how things work out on the Old Calendar, Russian Easter will happen right around then too.  We’ve often celebrated Michael’s birthday as part of the big annual open house held by his godmother (when she was still with us) and her husband.  His godmother would make a cake for Michael and we’d sing “Happy Birthday” to him.  A lot of people came to this open house, as they continue to do every year.  On the day I’m thinking of, a man was out in the backyard with the rest of us watching us give Michael his cake.  Later the man came up to me and handed me a twenty dollar bill.  He wanted me to get something for Michael.  I thanked him and assured him I would.  People want to help Michael.  They want to do whatever they can to make his life better or easier.  I didn’t know this man, and I will probably never meet him again.  I will always remember him for his burst of compassion for my son.

5) One evening a friend of mine who lived up in the East Bay came down for one of his rare visits.  He’d borrowed his father’s Porsche.  We went out to dinner and I brought Michael with us.  (John wasn’t around yet.)  We didn’t go very far from home, and we had a good time at the restaurant.  My friend held Michael while I ate my dinner.  Being a young man, he didn’t have all that much experience with babies, so this was an adventure for him.  Unfortunately, when we were ready to go home, the car wouldn’t start.  From there it was one thing after another until I could get ahold of Chris and have him pick us up.  The point of this story is that we were parked next to a KMart that had an enclosed area before you entered the actual store.  It was getting later and colder, so I sat in there with Michael while my friend tried to get the car working.  The staff of KMart were getting ready to close, but they were very kind.  This was back before I had a cell phone, so they let me call Chris, then offered me whatever blankets or baby supplies I needed for Michael.  At this point I was starting to get really upset, worrying over Michael, so their concern and assistance meant just that much more to me.

6) Now this story happened not too long ago.  I was meeting my Japanese teacher in a local coffee shop.  I’d been rushing around all day getting things done so I could meet her in time.  I had made a mental note about my pocket money, but somehow I got hung up on an earlier version of events and forgot giving some cash to John.  When I went to the cashier to pay for my drink, I suddenly discovered I had no money.  I was so embarrassed.  I didn’t know what to do.  I didn’t want to impose on my teacher.  The young lady behind the counter took pity on my confusion and told me not to worry about it.  There was enough in the tip jar to cover it.  How kind of her!  She didn’t have to do that.  My lesson started on time with no undue awkwardness.  I’ve been back to that coffee shop more than once, and I’m a heavy tipper!

7) In Santa Cruz there is a wonderful street named Pacific Avenue.  If you want to be formal about it, it’s the Pacific Garden Mall.  Time and time again I’ve gone there with my mother, my sister, my husband, my son John.  I’ve gone Christmas shopping there with my best friends.  I once ran through a torrential rainstorm there and bought a painting for two dollars from a UCSC student who spoke French.  I’ve given money to street musicians and talked to the man who makes animal balloons outside the candy store and I spent a lot of time in the Borders when it was still there.  Aside from an international airport, Pacific Avenue is the best place I’ve found for people-watching, especially on a bright Sunday afternoon.  You never know what you’re going to see, and I mean that.  No matter how bad things feel, no matter how dark it’s gotten inside me, if I hang out on Pacific Avenue for a while, something will happen to make me feel better.  And so I salute all of the people, the shopkeepers and sales clerks and food service folks and the entertainers and the tourists from all corners of the globe.

If you ever get the chance to light that candle instead of cursing the darkness, take it.  Speaking as someone who has been in desperate need of a little light, I can assure you that a single candle flame can make all the difference in the world.  From that little blonde girl in the hospital with me to that doctor whose human side I got to see, there have been people out there kind enough to light my way and keep me going despite all the depression, the grief, the trauma, and the pain I’ve endured.

God bless you.  Every single one of you.  You don’t know it, but you may have saved my life. 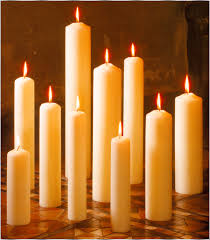 4 responses to “Light That Candle”