When I was at Nippon 2007, the first World Science Fiction Convention ever held in Asia, I had an opportunity to meet a really wonderful young lady.  I knew her as Matsuzaki–san.  It was the night of the Hugo Awards.  My best friend Pat MacEwen and I had dressed in our best, which for me included the yukata and obi I’d bought in the Dealer’s Room earlier that day.  I had no idea how to put on the lightweight summer kimono.  It’s not like putting on a bathrobe and just tying the sash around your waist.  My dignity was being preserved by a combination of bobby pins and safety pins thanks to the efforts of some friends in the ASFA Suite, the Association of Science Fiction & Fantasy Artists.  Once the formal Award ceremony was over, the party floor got busy and more people came drifting into the suite.  That’s when I met Matsuzaki-san.

One of the American young men had brought Matsuzaki-san up to the ASFA Suite with him.  After a few painful minutes of trying to talk to each other, the young man and Matsuzaki-san realized they really couldn’t communicate.  The young man was at a loss and drifted away.  Having been alone in the corner at more than one party, I wasn’t about to stand there and watch Matsuzaki-san suffer that embarrassment.  I didn’t speak much Japanese at all then, but I could point her toward the food and the drinks and make sure she had some of both.  My helpers and I were still trying to sort out my yukata situation when Matsuzaki-san came over to me and said, “I am kimono master.”  She tugged and pulled and spun me around and got me sorted out good and proper.  That won her the general admiration of everybody watching this floor show, effectively breaking the ice with the rest of the people present. 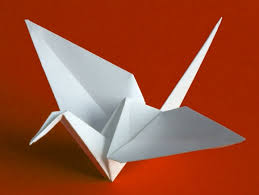 Matsuzaki-san and I sat on a couch together so I could show her the little photo album I’d brought with photos of my husband, Michael and John, and of course my cats.  Matsuzaki-san showed me the photo of her dog she kept on her phone.  He was a shaggy little black and white fellow who looked very cuddly.  I found out that Matsuzaki-san worked as a taxi dispatcher.  Now that impressed the daylights out of me.  Second only to being an air traffic controller, I can’t imagine a job that would put the pressure on a person to keep track of so many places and people at once.  The more I got to know Matsuzaki-san, the more I enjoyed her company.

When it was time for me to move on to the SFWA Suite, I made sure Matsuzaki-san had made enough new friends that she’d have people to talk to after I left.  I needn’t have worried.  Matsuzaki-san was also very talented at origami.  She took one of the pieces of hotel notepaper and made two, count ’em, TWO cranes joined at the wingtip.  Now how cool is that?  When I left, Matsuzaki-san was sitting with a group of people, answering questions and making something new.

I love Japan.  Every Japanese person I have ever met has been kind and helpful and really smart and good at all kinds of things.  I can’t wait for the day I visit Kyoto.

4 responses to “Making Friends in Yokohama”